I’ve always enjoyed road riding, but I must admit that since the opening of the Baileys trails, my road bike has spent some lonely days in the garage. So when I saw Portsmouth Connex’s announcement of their first annual WILD Ride on paved roads through the Shawnee State Forest, it seemed like a perfect opportunity to dust off the skinny tires.

Located just west of Portsmouth, OH, Shawnee is Ohio’s largest State Forest: 60,000 acres of rugged, heavily forested Appalachian foothills, full of streams and ridges, hiking and bridle trails. Nestled within the State Forest is Shawnee State Park, which offers an overnight lodge with dining and a pool, cabins (some pet-friendly), and over 100 campsites. 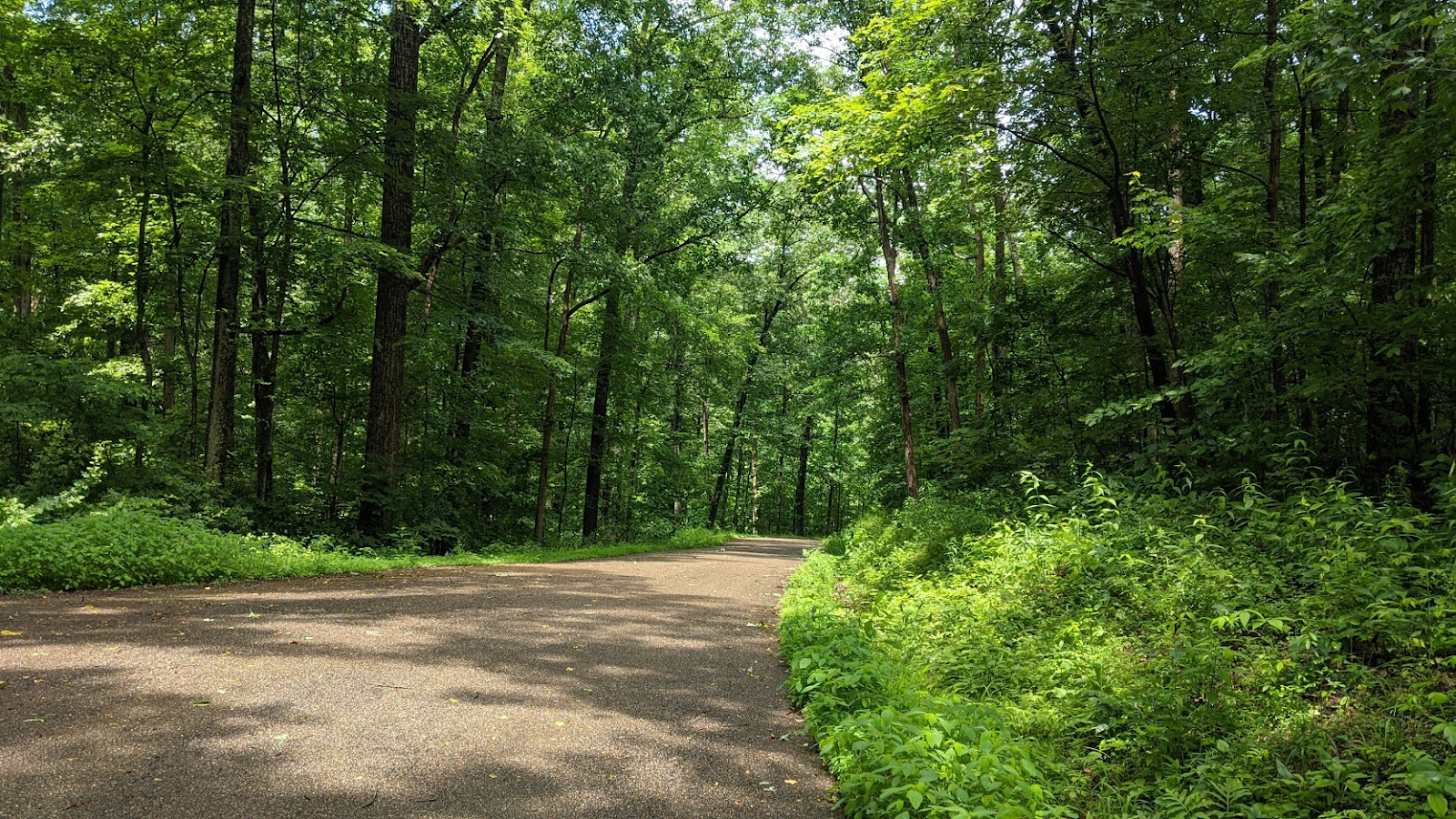 Like the good Athenians we are, Rob and I chose the middle-distance “Bobcat,” a 31-mile loop with about 2000 feet of climbing. The Ride also offered a 16.5 mile out and back option (the “Bear Cub”), as well as the “Rattler Roll,” an advanced 56-mile route with 3750 feet of climbing.

The weather on Ride day was unfortunately uncooperative, with torrential rains hitting the area right in the window of the rolling start. While some brave souls ventured out in it, we decided to wait it out, and the ride organizers were very accommodating about letting people start late. As we proceeded, we learned that Ride staff were also out diligently clearing trees that had fallen during the storm, ensuring a clear route for the riders.

From the Ride start in the Lodge Parking lot, the first few miles were a gradual downhill, with just a short stretch on the state route, before a turnoff at Camp Oyo took us into the Forest proper. For the next eight miles we followed Forest Road One, a fair bit of which was a gradual but long climb to the highest point on the route, followed by a fun and twisty descent down to the first rest stop. The route continued on the beautiful forest road, to a short stretch on a state route and back on to lightly traveled forest roads, with a second rest stop, offering much-appreciated IcePops.

We continued along Big Spruce Road, with another climb that was mostly gradual, but with a steep bit at the end. This part of the route also intersected the shorter “Bear Cub” route, meaning that any rider having difficulty could shortcut back to the start. We continued on the stated route, rewarded with more lovely forest scenery. The last several miles of the ride and the penultimate climb, after Rest Stop 3, were back along State Route 125, but it never felt uncomfortable to ride with the traffic. In fact, roads were very smooth along the entire route, and I had no trouble on 23mm tires, even with a fair bit of small debris on the road from the storms. The final climb, back up to the Lodge, was not an easy finish to the ride, and my only improvement suggestion to the organizers was to see if they could skip that hill at the end by running the ride from another large parking lot near the Park entrance.

Finally, to answer the question you might be too embarrassed to ask: the swag was great! Finishers received an “edible medal” (a decorated cookie representing your route’s totem animal), a pint glass, and a coupon for a free beer at the Portsmouth Brewing Company, which we promptly redeemed before heading back to Athens. Keep an eye out for next year’s Portsmouth Connex WILD Ride– this is one to add to your Road list!